History of the Edward Howard Clock

Towards the end of this page content, you'll read about a successful 2004 fundraising campaign by then Councilor Normand Rousseau and the Lewiston Youth Advisory Council (LYAC) that enabled the clock to become a three-story historical attraction, one that is a tremendous "hit" during school tours. 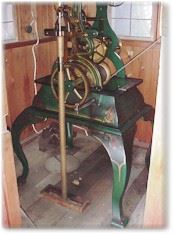 Edward Howard was born in Hingham, Massachusetts, and at an early age apprenticed to Aaron Willard Jr., a renowned Massachusetts clockmaker. He began manufacturing clocks in 1842 and soon became known as a mechanical genius. Edward Howard along with Aaron Dennison from Freeport, Maine, began the first watch manufacturing company in the United States called “The American Horologe Company” eventually to become “The Waltham Watch Company.”

The timepiece in the Lewiston City Hall is a Number 3 (large size) movement with time only function, serial Number 1501. The historical records from the E Howard Company indicate that this timepiece was manufactured in 1891.

When these clocks were manufactured there were options available which would enhance the performance and value of the timepiece. The Lewiston City Hall timepiece has all of the additional options, namely the “Denison Double Three Legged Gravity Escapement,” the “Temperature Compensated Pendulum,” the “Dial Illumination Regulator” and the Pilot Dial.”

All the weight driven, pendulum regulated mechanical tower clocks are registered with the National Association of Watch and Clock Collectors,. The E Howard tower clock in the Lewiston City Hall is one of those timepieces.

The clock was purchased by the City of Lewiston in 1891, at a price of $1,265. The clock was situated in the tower of City Hall until 2002 when the City decided to restore and relocate the clock to a more visible area of City Hall. 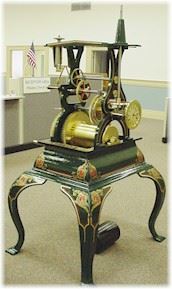 The Balzer Family Clock Works, clockmakers and watchmakers since 1970, have specialized in the restoration of tower clocks since 1985. Rick’s interest in restoring clocks began as a hobby, starting with smaller clocks and watches and developing into a full time career. Rick’s interest soon focused on the restoration and the custom design and manufacture of large mechanical tower clocks.

On Thursday, July 15, 2004, the City of Lewiston's 1891 E Howard timepiece was unveiled as a multi-level attraction at Lewiston City Hall. The clock, formerly in City Hall's tower, was restored in 2002 by Balzer Family Clock Works, of Freeport, Maine.

Due to a very successful community fundraising effort, visitors to City Hall will now be greeted by a glass-encased 14-foot operational pendulum at the Pine Street entrance and will also be able to view glass encased operational clock mechanisms on the second floor landing of the building. Restored tower dials also display the correct time in the building's tower.

Mayor Lionel C. Guay, Jr., noted, "It's indeed a new day in Lewiston with growth and development on the rise. And, this beautiful attraction is yet another symbol of people's vision, creativity, and commitment to enhance their community as a whole." 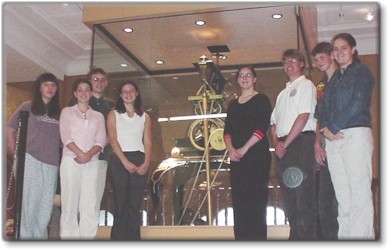 Fundraising for the relocation of the historic attraction was led by the Lewiston Youth Advisory Council in partnership with Councilor Norm Rousseau. Over $25,000 was raised through various youth council initiatives, and, in addition, many in-kind donations of time, materials, and expertise greatly contributed to the project's success.

Guay added, "Clearly, without the overwhelming generosity of individuals and businesses alike, this project would not have happened."

Guay also commended the "diligent construction abilities" of the Lewiston Public Services Department in relocating the piece. In addition, he offered words of praise to the youth council commending their willingness to become involved within their community.

Councilor Norm Rousseau echoed the Mayor's sentiments adding that "People throughout Maine are already talking about this clock." He gave the example of Patricia West, of Bristol, Maine, who had contributed to the fundraising campaign and drove all the way from Bristol to attend the celebration.

Rousseau noted, "When the youth council did a television interview about the clock last fall, Mrs. West responded with a donation. When the clock was in the City Hall tower, Mrs. West, who is formerly from Lewiston, had her 1st apartment at 124 Blake Street. She said she could always see the clock from her livingroom and kitchen windows and hear it chime at 9 p.m. Those memories apparently are what prompted her to contribute. With her donation, she also wrote, 'I am glad to see Lewiston youth involved in something to make the city proud.'"

In addition to Guay and Rousseau, comments were also given at the celebration by Tarrah Bowen, Chair of the Lewiston Youth Advisory Council; Director of Public Buildings Mike Paradis; and representatives from U.S. Senator Olympia Snowe's Office, Senator Susan Collins' Office, and Congressman Michael Michaud's Office. A statement was also read from Rick Balzer, of Balzer Family Clock Works, who was unable to attend due to a work commitment.

The 1891 E Howard timepiece is registered with the National Association of Watch and Clock Collectors, and Lewiston is currently one of only a few communities within New England where an operational timepiece is on public display.